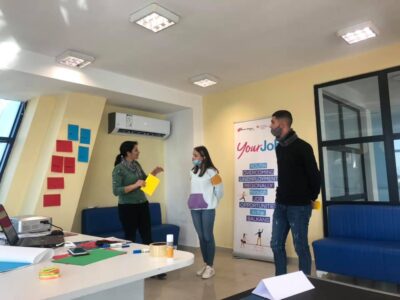 “Can we repeat the training?”, or “this training really helped me to get rid of my complexes in public” were some of the comments of the 10 young training participants. By the end of this training there were so many positive comments, because it was really interactive, which means that the young people during all the training were good participants and interacted with each other in small groups or through the presentations in large groups.

The training started with concrete and inclusive exercises. One of the first exercises was the introduction of the friend, giving them a few minutes to first get to know him or her. After knowing each other for a few minutes, each couple had to go in front of the group and introduce the friend in front. Even though seemingly a simple exercise, there were young people who had never before spoken in front of the public and this was exciting for them, but also made them break the ice by coming out and speaking in front of a large group.

In each round of presentations the young people identified the best presentation, considering which one attracted their attention most or the words everyone chose to introduce the friend in front of him/her. In every case the trainer intervened with advises on how to best improve the presentation.

The exercises followed one another and a great attention was paid to young people who had a business idea. The two main ideas were the establishment of a tailoring business and of the nail business. For this reason, three large groups of 4 people were set up and each group would introduce the business idea and its details.

What was noticed is that all three groups chose different ways to introduce their idea. In each group the trainer pointed out the best and most suitable techniques to be used during the presentations, along with some appropriate tips for the young people to be as successful as possible also in other cases they should introduce or speak in public, even more numerous.

The training was concluded with feedback and comments on the activities carried out during that day, the training was very helpful for all of us to remove our complexes and emotions, empowering and preparing us for a better communication.