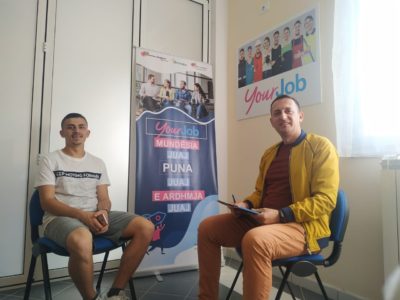 A DIFFERENT LIFE POSSIBILITY FOR MARIGLEN!

Mr. Mariglen Pecaku is a 19 years young men living in Shkodra. His life has been very difficult, as he has grown up with his mother, two sisters and a stepfather. Economic hardships have caused them to beg on the streets for charity and not attending school regularly. His stepfather, in unexplained circumstances, killed his mother and is serving his sentence in prison. After this occurrence, his sisters were sent to the SOS’s village and Mariglen was sent to an orphanage. During this time he is wanted by his biological father, but Mariglen found it impossible to live with him after all these years of his absence. He failed to complete his 9-year compulsory full-time education, but he managed to take a waiter course and be certified for it a year ago.

From the info meetings with Parishes in Shkodra, he was introduced with the YourJob program and the YourJob guidance counsellor in Shkodra. Mariglen appeared in project’s office and took individual counselling about professional orientation. He participated also in some soft skills trainings. Meanwhile, the YourJob Guidance Counsellor contacted a business which runs a bar, restaurant and hostel, to offer Mariglen an Internship as a waiter. Project will pay 3 months minimum salary for Mariglen, after that he will be employed by the business. The business has offered Mariglen free accommodation in hostel during this time of Internship and then maybe even after his employment, based on his performance. Mariglen is very grateful for this possibility given by YourJob and started full of ambition and pleasure, directly after signed MoU between Caritas, the business and Mariglen.