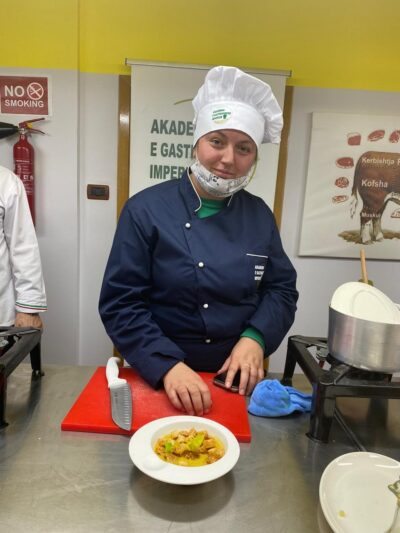 Nadire came to Your Job Office in Kamza together with her young son. She had heard little about the YourJob project from a relative but wanted to get more information about the activities the project offered.

During the conversations of Nadire with the Guidance Counsellor, she talked about her difficult life, how her husband had died while working in the village and she had raised her only son, with many sacrifices. After the death of her husband being in a small country, his family had not allowed her to work or study because of the mentality.

That is why Nadire was seeking the support of YourJob to take up a cooking profession, as it was her biggest passion and she had decided to fight for herself and her little son. After this conversation where the emphasis was on the challenges she had gone through, we also set the day to go to the course center together.

The meeting at the course center for Nadire was very exciting, as she liked the course center a lot and she felt very good there. Nadire is already entering the third month of the cooking course and altogether, she has started working at a fish restaurant as a culinary assistants suggested by the Academy, where she is attending the course.

She is very pleased not only with the fact that she has gained a profession she has always dreamed of but also because she feels empowered to challenge a mentality that has prevented her from living free so far.