TEAM ENGAGEMENT IN THE FIRST DAYS AFTER EARTHQUAKE EMERGENCY

TEAM ENGAGEMENT IN THE FIRST DAYS AFTER EARTHQUAKE EMERGENCY 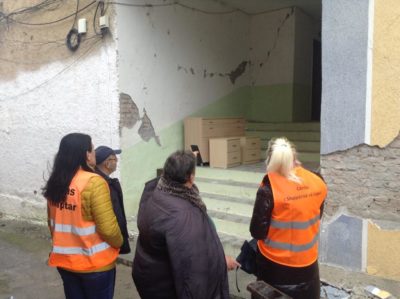 The earthquake of 26th of November 2019, affected especially the areas of Durres and Thumana but as well Kurbin and Lezha with 51 victims and with severe structure damages. Caritas Albania staff were mobilized in a very structured way and was at fully disposal to intervene in this emergency.

The Coordinator of Your Job Program in Albania, in the immediate days after the earthquake was engaged as part of the emergency team within Caritas Albania. She was responsible of organizing volunteers, among them a lot of youth, Albanian and foreign people, who showed interest to be part of Caritas Albania’s intervention in the damaged areas. Field visits and accompaniment of foreign donors was as well one of the most important tasks of Ms. Bici during this period.

The Guidance Counsellors of Your Job project in Kurbin and Lezha, were in the immediate days after the earthquake effectively engaged and gave invaluable contribution to help people in need in the damaged areas of the earthquake. Emarilda, the Guidance Counsellor of Your Job project in Kurbin, was highly engaged in different actions during the first days of emergency. She payed visits directly after the earthquake in field when were still victims under the rubble. She brings different heartbreaking stories from adults and children’s who lost their homes and are still living in tents.

Not less engaged was even Judona the Guidance Counsellor of Your Job project in Lezha, who give her support for a few days in psychological field in full collaboration with the Order of the Psychologists of Lezha. She gave support towards children of damaged areas from the earthquake as in Thumana, Kurbin and Lezhe. Different animation techniques and games were applicated with children’s considering very important therapy to change the mood of these days. Although two months have passed almost from earthquake, the consequences will remain longer because a huge number of people lost their homes and still lives hotels and tents. Nobody knows how long they will stay there.